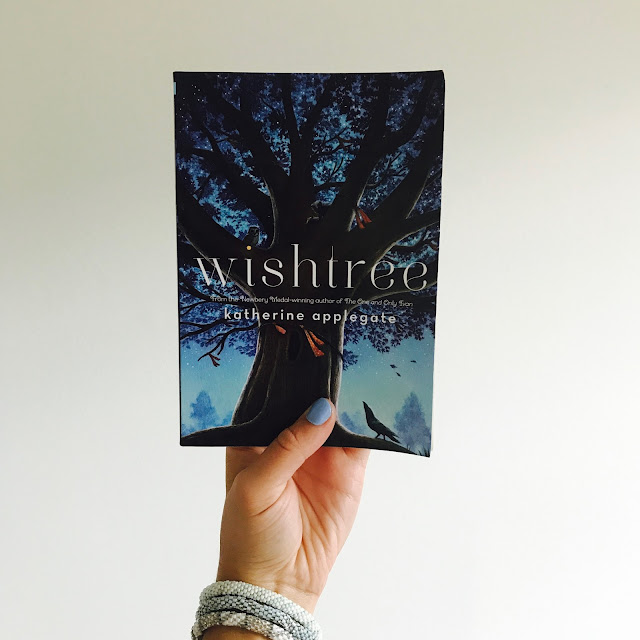 Note: Top Shelf Text received a copy of this text from the Kid Lit Exchange network, provided by the publisher for free in exchange for an honest review. All opinions are my own!

Katherine Applegate is one author that middle grade readers adore, and for good reason. She brought us The One and Only Ivan, a Newbery Award Winner in 2017 and one of my top three children's books of 2015. She also made a wonderful Newbery Medal Speech that had me teary and inspired to share great literature with my students. Wishtree is Applegate's newest novel for middle grade readers, and it's one you'll see on just about every teacher's wish list for school this year.

The novel is told from the perspective of a Red oak tree -- a wishtree, to be exact. This tree, aptly named Red, begins by telling readers that most people don't know that trees can talk -- and that if they weren't introverts, they'd have quite a lot to say. Red's roots are firmly planted, and every year on the first of May, the locals come to hang their wishes on her branches. Some wishes are silly, some are serious. Red doesn't have the power to grant any of these wishes, but still, it's a tradition that she cherishes.

Being a tree, Red spends a lot of her time quietly observing the people and animals around her. Across from her sits two houses, and when a new neighbor moves in, Red is surprised to find that the family's child, a little girl named Samara, comes to her right away to make her wish -- that she could have a friend. Samara's family is Muslim, and while Red sees that the divide between cultures and religions is pointless, the people in the neighborhood aren't as wise. Normally, Red wouldn't take action -- it goes against nature's rules to speak to humans, but after a hateful incident leaves her new neighbor with hurt feelings and fear, Red knows that something must be done.

Readers, I fear I'm in the minority today. I found myself feeling slightly disappointed in this novel, but before I tell you why, I want to tell you that this is still a good novel. It's worth reading, and it's worth recommending to children. I fear that I'm disappointed because my expectations were so high -- that I hoped for the same, powerful reading experience as I had with The One and Only Ivan.

Here's what I loved about the book: the message. Islamophobia, prejudice, and hate should not be welcome in the places where we live and learn. True neighbors welcome each other, and I was genuinely touched by the kind gesture of one character in this book. For that reason, I'll put Wishtree on my shelves this year, with the hope that it will inspire some students to speak more kindly, be understanding, and show empathy with their actions.

What I didn't love was the plot. Or the characters. Aside from the moment that left me teary, I thought the characters fell awfully flat. Compared to the depth of previous characters that Applegate has brought to life, these ones just didn't convince me to feel invested. And the big moment? It happened too fast. There was a lot of talking and barely and action, so I felt that the best part came and went too quickly. It took me almost an entire week to read this book, a sign (for me) that it just didn't have my attention in the way that I'd hoped. As a story, I feel it has less to offer than Applegate's other works. However, as a message, I feel that it's incredibly timely and important for both children and adults to hear.