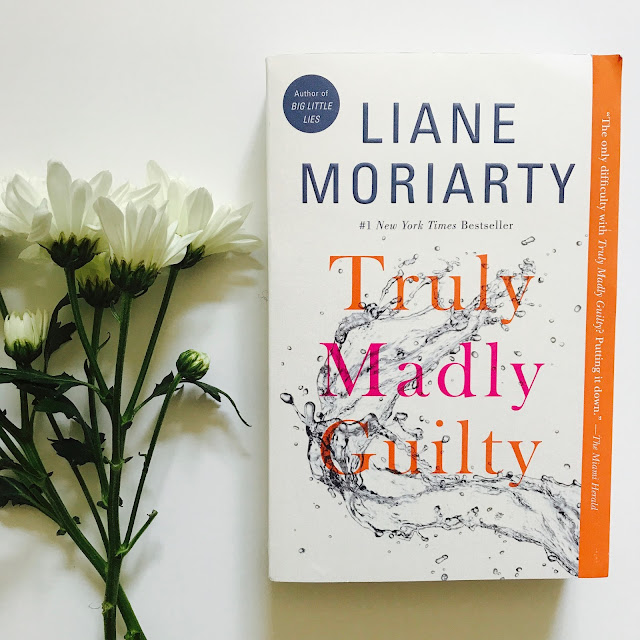 Note: Top Shelf Text received a copy of this book from the publisher in exchange for an honest review. All opinions are my own!

Fair warning to those of you who have not yet read Truly, Madly, Guilty and may want to do so in the future. This review does contain spoilers, and is speaking more to the many, many readers who reached out to me while I was in the process of reading with their own thoughts about Liane Moriarty in general and this novel in particular.

I'll start with a quick re-cap of the events that led to this uniquely-formatted review. Truly, Madly, Guilty was the first novel that I've read by Liane Moriarty. I hadn't read her work before because although I'm not a picky reader in general, I am extremely picky about contemporary fiction novels (although, there have been a few I've read this year and absolutely loved) and I always thought of Moriarty's books as belonging to the "chick lit" category.

I knew, however, that Moriarty has a huge following of readers who adore her work, so when the opportunity came to read this I went into it with an open mind.

I posted a quick update when I was 230 pages into the book, to ask readers they too had felt that the events between the introductory hint that something had gone very wrong and big reveal were a bit drawn out.

And wow, you all had a lot to say about this.

Mostly, you said that this was not your favorite of her books. Actually, I think about 99% of you had that response. Collectively, however, you do highly recommend What Alice Forgot and Big Little Lies, so when I do have space on my TBR again, I'll try picking up one of those for another shot at joining the Liane Moriarty fan club.

Vid and Oliver were really the only characters that I genuinely liked while reading. Having a character that I connect with or admire is pretty important to me when reading contemporary fiction and Vid's character especially made me smile as I read. Because so much of this genre is dysfunctional, I have a really hard time with books that are all about everyone's issues, and Vid's character provided some comic relief to combat that, while Oliver was just genuinely a nice person.

Tiffany's character didn't feel substantial at all. Sure, she may have had one of the more well-developed backstories, but her present day personality almost didn't exist. I had a similar reaction to Sam -- sure, he is in the middle of a crisis, but all we saw of that was a few incidences of him acting out. In the end, I was apathetic towards him.

Clementine was the least likable character to me. She came off as selfish -- not because she didn't want to donate her eggs, but because she constantly weighed everything in terms of how much kindness was owed. It didn't seem like she was capable of being kind for kindness' sake.

Erika was the character that I found most dynamic. Though she had a whole host of issues, I actually had empathy for her because Moriarty provided us with insight into her childhood and therefore the reasons why she has such a unique personality. Her mother was a fascinating character as well. Had this been a story instead focused on Erika, Oliver, and her mother (with the others as minor characters), I probably would have found it a lot more compelling.

For the first three hundred pages, I wondered what we were working towards. This portion was too heavy on mentioning the "bad thing" but didn't actually do enough character building, leaving hints, etc. I just felt really annoyed with the characters (Why is everyone moping around? I wondered) and was hoping that the big reveal would be proportionate to the waiting period. (Hint, when we finally got to page 300 and found out that Ruby was, in fact, okay -- that's where I decided that it in fact was not proportionate.)

I don't think that the reaction of the characters was appropriate for one reason, and I do want to let readers know that I am not yet a parent -- so while I am quite frequently responsible for other people's children, I don't have my own. Being a parent makes feelings about these types of situations more complicated and therefore more likely to be a point that people have big feelings about in discussions. I didn't think the big event was equal to the reaction because the attention was focused on blaming the social relationship. To me, the message came across that parents shouldn't ever be social at the risk that their children will get hurt. Parents are human beings. Parents deserve to have social time, and hobbies, and their own personalities that aren't entirely wrapped up in their children. For the parents to feel disgusted with themselves for having fun was not something that I felt was appropriate.

It was in the last one hundred pages or so that this story felt somewhat redeemed for me. Most of that had to do with how the consequences played out for Erika and Oliver. I was glad to see Erika letting go of responsibility for her mother -- I thought that was the first thing she needed to let go in order to move on to a life in which she didn't constantly fear turning into her mother. And I was glad to see that Oliver and Erika compromised on the baby situation. I would have been sad for Oliver had the issue been tabled altogether. Of course, nothing really needed fixing when it came to Vid and Tiffany, but with Sam and Clementine, I just wasn't that glad for them. I wasn't invested enough (or truthfully, didn't have enough empathy) to hope that they managed to work out their marriage problems post-ending.

Sometimes I love when the setting becomes a character in itself. With the regular jumps between the day of the party and two months later, I didn't actually realize that the constant barrage of rain was symbolic for the terrible funk that all the characters were in until after I finished. I understand that the final day, the first sunny day in two months, was perhaps meant to be aligned with a feeling of closure and a brighter future for all. I get the aim there, but I don't love it. I'm not sure it added any feeling for me, especially because I didn't even notice it at the time.

WHERE TO GO FROM HERE?

I want to say that I didn't dislike this book. Overall, I think this is a good book to read as a palate cleanser. I read it pretty quickly (in just about two days), and after a much more heavy, emotional read. So I appreciated having something lighter (even if the subject matter wasn't actually light at all) in between more serious books. I'd give it somewhere between 2-3 stars (out of five), which means that I had the kind of reading experience where I enjoyed parts of it but in the end, didn't feel it was just the right book for me. I do, however, think that Big Little Lies looks like one that would be of more interest to me, and I found The Husband's Secret in a stack of books that I already own, so you can expect one of those to make it onto my reading list soon!
Posted by Madeleine