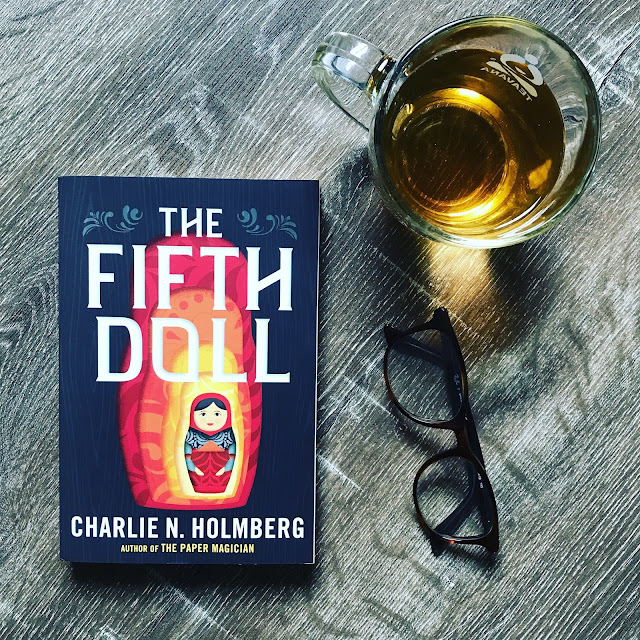 If you've been a reader of Top Shelf Text for a long time, you might already know that Charlie Holmberg is the author of one of my favorite fantasy series -- The Paper Magician Trilogy. (For those of you unfamiliar, it's a fantasy series that's gentle and charming and one that I wouldn't hesitate to re-read.) So when I saw that Holmberg had a new book coming out this summer, I didn't hesitate to pre-order myself a copy. (Can I just digress here for a moment? Pre-ordering is great but it makes waiting feel so hard! Especially when you pre-order a June release in April.) The Fifth Doll is a total departure from The Paper Magician, and I loved how Holmberg immersed her readers in Russian culture with this new fantasy tale.

The story follows Matrona, a young woman living with her parents in a small village. When we first meet Matrona, she seems to have the same cares as any other twenty-six year old village girl -- she and her closest friend Roksana are busy daydreaming and preparing for Matrona's upcoming wedding. Matrona isn't happy exactly -- she could more aptly be described as content, but she's hoping that eventually she'll find love and happiness in her new union. Matrona's seemingly unremarkable future is ruined, however, when she ventures into the home of the local tradesman to return a lost object and finds a room containing peculiar dolls. The tradesman has row upon row of Russian nesting dolls, all painted to the exact likeness of the villagers. Matrona stumbles out of his cottage, confused and alarmed. When she later returns to the cottage, the tradesman forces her into an apprenticeship that becomes her nightmare.

I loved the premise of this book. It was unique, slightly creepy, and so interesting. I don't usually read novels featuring Russian culture, so I learned a lot too. (And if you have any to recommend to me, please leave a comment below!) I don't want to reveal too much about the plot because the element of surprise and suspense was my favorite part of reading, but I do want to say that this is a perfect fall read for fans of the fantasy genre. (You can definitely expect to see it on my October Reads list this year.) And while the story had its fair share of chilling moments, it wasn't gruesome -- the villainy was more of the psychological type.