Review: The Other Girl (Plus, Q&A with Erica Spindler!) 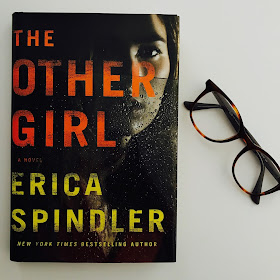 Note: Top Shelf Text received a copy of this book from the publisher in exchange for an honest review. All opinions are my own!

It appears that this has been the summer of really good thrillers and really good mysteries. The two often go hand in hand, but sometimes a new book comes along that's a perfect combination of both genres -- and Erica Spindler's The Other Girl is one of them. I read this book in a day and it was successful in keeping me up way past my bedtime and in giving me a good scare.

The Other Girl follows Officer Miranda Rader -- a veteran of a small-town Louisiana police force and former juvenile delinquent. Miranda has built a career as a trustworthy, intelligent police officer and excellent investigator. No one on the force, with the exception of the chief himself, knows of her less-than-perfect past, and that's the way the well-respected officer wants to keep it. But of course, when you're a character in a thriller, your secrets are bound to unravel. When Miranda and her partner are called to the scene of a grisly crime -- a local university professor murdered by an apparently vengeful lover -- Miranda finds herself with a chilling link to the victim.

Like I said, I read this in a day because I just had to find out who the killer was -- as soon as Miranda discovered a piece of evidence linking herself to the crime, I was hooked. At under 300 pages, the investigation moves quickly (and so does the romantic element) so it was a perfect read for me to take along to the pool. While the characters weren't necessarily deep, they were well-crafted enough that I had empathy for some and disdain for others. The plot was enough for me to keep turning the pages, and I was so surprised by how the events of Miranda's past linked to the crime.

I also liked that this was a book with a female detective -- I read a lot of mysteries and thrillers, but very few of the contemporary ones feature female detectives. While Miranda definitely wasn't a role model in her teens, her transformation into a professional made for a good redemption story and by the end of the story, I admired both her values and her actions. I'd recommend this to any fans of the genre, and in particular to those looking for a book that will have you tuned out to the world until turning the last page.

Q & A with Erica Spindler, Author of The Other Girl

Start by telling us a little about The Other Girl and what inspired the story?

In The Other Girl, the grisly murder of a popular college professor, forces Detective Miranda Rader to face the traumatic past she thought she’d buried. It leads her on a quest for justice that may cost her everything—even her life.

A real life event close to home inspired The Other Girl. I live in a family-oriented, bedroom community of New Orleans. One afternoon the news exploded with the account of an attempted abduction of a young girl walking home from her bus stop. The girl managed to escape and the perp got away. As you can imagine, the story was everywhere and on everyone’s lips for days. She’s interviewed, her parents are on TV.  But no arrests are made, and the case goes silent.  Until—the sheriff appears on TV and announces the girl made up the whole thing.

I was shocked.  The girl’s identity is known—so now everyone thinks she’s a liar. All her friends, teachers, family, neighbors.  Everybody. What if she really was telling the truth?  How would that impact her life now—and in the future? Would she bury the past?  Would she long for justice?  And what if she wasn’t the only girl? What about justice for them?  These questions are at the heart of both this story and my main character, Miranda.

Can you give us a look into the character development process, more specifically how you developed protagonist Miranda Rader?

I started with the “What if no one believed you question” and built my character from there, by asking more questions, defining who she is at the time of the incident—and how do I make it believable no one backs her up.  Then I tackled all the ways that might have changed her life.  For example, I decided she would have felt powerless against the system, so she would choose to become part of it as an adult—and what’s more empowering than a badge and a gun?  This really is a psychologically driven thriller, and my end goal was justice and healing, so every decision I made had to pass the test: Will this take me a step closer to that goal.

How would you describe your writing process, including getting started, conducting research, and knowing when a work is complete?

Beginning always starts with what I call my “Dark Gift” moment. It a goosebumps reaction to something that happens to me personally, or in my personal sphere.  And it starts the worst-case-scenario, what-if snowball rolling. I usually brainstorm on paper a lot.  Jotting ideas, plot points, bits of dialogue, character characteristics, or whatever.  The good stuff keeps coming back, the other just falls away.  I do whatever research I need to start the book, then research as I go.  (I don’t love research.) I’ve recently discovered a screenwriting book titled Save The Cat by Blake Snyder and have started incorporating his notecard, three act process and have found it very helpful.

When I think I have enough of a direction, I open a document on the computer and begin.  There are days writing is the hardest job ever, and other days when it’s heaven on earth—and lots of days in between.  For me, I know it’s done when all the threads are tied up and I get this euphoric feeling of satisfaction—not for having finished, but for my characters. It their happy ending, after all.

Tell us about your influences, from all-time favorite authors to most inspirational works. Additionally, are there any recent titles you’d recommend?

Down here in south Louisiana, we’re known for our gumbo.  It started with the cajuns, who would throw whatever they had in an abundance into the pot to make a rich, flavorful stew.  That’s the way I think of my influences—horror like Stephen King and Peter Straub; Glitz and Glamour like Judith Krantz and Sidney Sheldon; childhood influences like the Trixie Beldon and Nancy Drew mysteries; the Gothic Suspense from my teens years, like Phyllis Whitney and Mary Stewart; and the Contemporary Romance like Nora Roberts and Sandra Brown—they all come together in my stories to create this complex and, hopefully, tasty mix.

What would you say is the greatest writing tip you have for aspiring writers?

How about three instead? Believe in yourself, learn from your mistakes, and keep your butt in the chair!

When did you know being a writer was what you wanted to do? What was the moment like when you realized it was becoming a reality? Was the path to publication a linear one?

I always thought I wanted to be a visual artist, which is what I’m trained for.  I’d completed my MFA and lined up a University teaching job for the fall.  Then I caught the writing bug.  A cashier dropped a free Nora Roberts novel into my shopping bag; I read it and was hooked.  Although a big reader all my life, I’d  never read romance. After a months-long reading frenzy, I decided I had to try to write one.  The minute I put pen to paper, I knew I had found my true calling. I never looked back.

As for a linear path to publication—if that includes rejections, rewrites, rejections, rewrites, yes it was linear.  My very first novel, rewritten several times, is still in a drawer. I’ve nicknamed it Fatally Flawed, because I made every mistake a beginning writer can make.  It’s my learning curve, I’m proud of that fact, and it will never to see the light of publication.  Promise!

What would you say makes The Other Girl stand out amongst other popular thrillers from the last few years?

There have been so many awesome thrillers published in the last few years!  What I hope stands out about The Other Girl is it’s main character’s authentic journey as she relives past trauma and fights for justice.  I think readers will really like her and be rooting for her.

Do you have any creative rituals for when you sit down to write?

When you're writing a suspense novel such as The Other Girl, how do you go about mapping out the plot? Did you know the ending ahead of time, or did you let the story unfold as you wrote?

In writing circles, you’re either a plotter or a pantser (as in the seat of your pants). I’m actually a bit of both. Some things I know. How it begins, who the hero is—and who the villain is.  I also start out knowing what the hero desires—or thinks she desires.
I know the crime, or crimes, that make the plot move, and also what the hero has to learn from this journey.  Everything else is the magic that happens as I’m writing—the story and characters take on a life of their own and things happen that I never could have planned beforehand.

Are there any pieces of you in any characters in The Other Girl?

Yes, definitely.  In all my books, there’re are bits and pieces of me scattered about.  (Sounds like crime scene!) And my heroic characters are always colored with my world view.


One of my all time favorite novels is Ghost Story by Peter Straub. Another is Along Came a Spider by James Patterson, and The Shining by Stephen King. The list goes on!

***
Thank you to St. Martin's Press for my copy of this thriller and for allowing me to contribute questions to their Q&A! As a reminder, all opinions are my own.
Madeleine
Share